Since the PR giant Edelman and Technorati are working together they are both trying to become an industry reference for statistics on the blogosphere. Of course this is free publicity for both and in plus they can sell the data to their customers. The question is how reliable is Technorati’s data? How serious is that business? 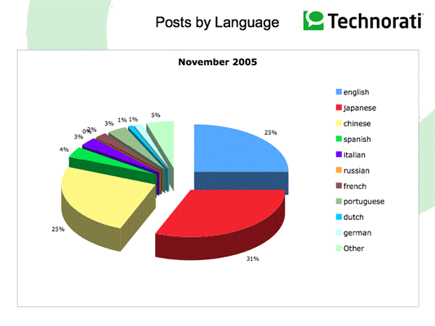 Japanese, the most active blogging language? Are the fake blogs—the so called “gomiburoggu”—part of that statistic? (A disproportionally high number of Japanese blogs are fake SEO-vessels). How is that data handled and sold and why has no one asked these questions before?

Technorati doesn’t have a wide enough acceptance to make such a claim. A large number of bloggers doesn’t use Technorati and thus the data that they deliver is incomplete and often just plain wrong. How do we know that?

Based on Technorati data, Edelman claims that the Japanese blogosphere defines about 31% of the global blogosphere while the English share is about 25%. Sensational, isn’t it?

By comparing the Internet language market share of English (35%) and Japanese (8.4%) it becomes clear that this result is more than just unlikely. Technorati Japan is popular, that’s all this study tells us. Of course it depends how they define “blog entry”. But looking at how wrong they were with their top 100 European bloggers the whole study collapses like a house of cards. That Japanese are 31 times more productive in terms of blogging than the Germans just doesn’t make sense. For someone that reads German blogs and lives and works in Japan even less.

The problem with Edelman/Technorati publishing unreliable data is that this data is hard to verify as there are hardly any resources to check back. The amount of raw data and the fact that everyone refers back to Technorati as their main source doesn’t allow to verify their claims.

While Technorati does acknowledge that they are “grossly undercounting the Korean blogosphere”, it seems irresponsible to publish and sell that messed up data as a work in progress.

What is in it for Edelman? Looking at how naively they orchestrated and handled the repeated Wal-Mart flogging and how badly they operate their website, they might seem harmless. Robert Pickard, CEO of Edelman Japan confirmed that “social media relations services might range from USD 5-25k per month”. And the main tool for “social media relations” is Technorati. Again, if that is true, it’s not evil. It’s amateurish. PR reinventing itself as New Media consulting?

Maybe they’re just a panicking PR giant trying to shake off their conservative armor and quickly get into a new field to reinvent themselves as No1 New Media experts.

Given how sensational it sounds to say that “31% of blog entries are Japanese”, it becomes clear why this data gets distributed quickly. And being cited everywhere by two big names it is quickly believed. The core idea of course is to generate attention for Technorati and Edelman.

But what if that data is all as bogus as the German top 100 bloggers? If that is the case, there is no need to boycott the two companies, sooner or later they will slip and fall by themselves.

UPDATE: Since December 2006 Technorati and Edelman no longer cooperate. Technorati Japan shut down in October 2009.