Last Sunday, they started airing the “Hello, I’m a Mac… and I’m a PC” ads here in Japan. And here’s a surprise: they’re different. The Mac guy isn’t particularly cool and the PC guy is a real “salary man” type. The ads aren’t as obvious as the Western originals. In Japan, you need to be more subtle:

The conversation translates as follows:

Same actor? No, they’re the Rahmens, a Japanese comedy duo.

My (Japanese) wife claimed that they used the same actor for both personalities. As I just learned (check comments), that’s not the case, but it doesn’t matter. It’s revealing that she thought so, as it means that the two are perceived by Japanese as being much more similar than their American counterparts.

A suit just means work, casual means leisure: Japanese don’t necessarily judge your character by your clothes. That one wears a suit and the other looks more casual reads differently. A suit means work, casual means leisure. If they wanted to show a cool, stylish guy, they’d pick some out-of-control Harajuku cowboy. But they went for the modest, almost-square Uniqlo type.

The difference is subtle, but in the end it’s quite obvious that the Mac is more sophisticated and a better friend. It’s mostly in his tone, his body language and his non-reaction to embarrassing little signs from Mr. Pasocon.

In Japan, you’re considered particularly dumb and obnoxious if you’re caught bragging about your strengths, and smart and nice if you play them down. Good manners for a Japanese wife: “My husband is weak, stupid and fat.” Bad manners: “My husband is strong, smart and handsome.” Think different, speak different. The Western Mac ads would backfire in Japan (the Mac would appear to lack class). The Japanese ads wouldn’t work in the West (no real message).

Mac: Sophisticated, humble and controlled. PC: Overly sure of himself and stiff.

Even though the Mac uses the more casual, boyish “boku” when referring to himself, he shows more sophistication than the PC, who uses “watashi” (Japanese have different ways of saying the word “I”).

The Mac guy controls his body language and facial expressions. Japanese manners are all about self control and making the other person feel comfortable. And Internet people can learn a lot from Japanese in that respect. The PC guy starts off very politely and gets more and more excited. He’s very proud of his business acquaintances. Notice the eyebrow when he says “watashi wa [raises eyebrow] businessu like na kankei bakari desukara.” English: “I [eyebrow] only have business-like acquaintances.” In the end, he becomes overly sure of himself and slaps the Mac’s back—in a “let’s be buddies” manner—like he’s in charge.

The Mac reacts as if he didn’t notice the PC’s lack of sense and takes his little slip with a humble nod and another boyish bow.

Okay, now that we understand some of the cultural differences, it seems that Apple underestimates the Japanese sense of humor—so far they haven’t used one of their key arguments for the Japanese market.

Please get me right. The ads are not bad, but once again, an ad agency is underestimating the customer, lacks imagination and isn’t reading the signs of the times. I’m not saying I’d make a better ad, I’m just saying you should listen to the client you work for. That way you’ll avoid those silly copyright debates. Steve Jobs pointed out the weakest point of PCs years ago:

So actually, I’m not saying anything new. The main difference between a Mac and a PC is taste. Taste shows itself in the interface through the use of typography. And taste matters. If you know Steve, send him a mail and tell him to look at these sketches:

To convince Japanese—or Chinese, for that matter—all you have to do is this: show the crappy PC font rendering next to the Mac’s kanji. All the Japanese that have seen this find it spontaneously convincing, as in Japanese it is so obvious: PC font rendering is ridiculous.

The rendering of the typographically more complex kanji characters on the PC is a total nightmare. It’s so obvious, yet nobody really talks about it. The superior font rendering of the Mac is an advantage without whats or ifs. Of course, the conversation would still need to be super polite and understated. Here is what I’d do:

I hope to see it animated some day, and if so, before Windows Vista comes out with a new font rendering engine. Few people actually know that Macs render fonts much more smoothly than PCs.

Translation of the Font Ad

I can hear the PC guy whining like a child: “That’s not true! You’re just some designy idiot!” Okay, let’s go back to Western style: “SHUT UP, PC GUY!” Font rendering is not a designy issue. Nicely rendered fonts are easy to read. Here is the translation of the font ad: 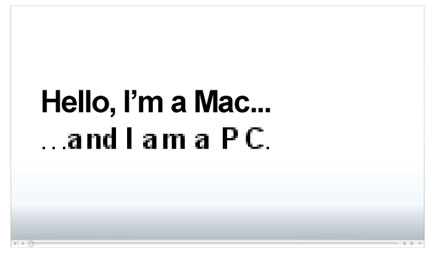 You hear the loud rattling of an old, cheap keyboard (PC) on one side and the delicate clicking of a new keyboard (Mac) on the other.

The problem is, advertising people don’t know enough about computers and cross platform differences to come up with that idea. But if you’re a web designer confronted daily with PCs destroying typography, or a usability guy sensitive to readability, this is the first thing that comes to your mind. I’ll be more than happy to make a flash animation for Apple Inc. It’ll cost them 1/100th of a regular ad and be 100 times more convincing.

If you think that’s too daring for the Japanese customer then please have a look at what they air on national TV. When it comes to humor, Japanese have almost no taboos. Hard Gay is a Japanese comedian who uses a fake hardcore gay identity to uncover taboos. His act quickly gained national attention and popularity. In one of his most famous episodes, he tries to convince the marketing department of Yahoo! Japan to hire him as their mascot. Amazing how far he gets in a country that is famous for its conservative business culture:

UPDATE: You might wanna have a look at the front page of the Wall Street Journal; they interviewed us on the very same subject: