With websites turning more and more into web applications, functionally as well as aesthetically, it’d be interesting to look at what makes a Web app work in terms of skinning. We start off by comparing two different approaches: HTML-skin vs. desktop-application-skin. In other words, Google versus Apple.

The Art of Noise

MobileMe relies on icons that don’t have any obvious meaning for important navigation and interface controls on the Web. This leaves users (particularly non-Mac-users) to guess what each icon actually does. Only the first three icons of the main navigation are familiar, and the first only because of its obviousness. Without text, one is forced to rely on mouse hovers and prayers to the ALT text god.

Compare these to the top navigation of GMail:

With plain text, it’s obvious where each link takes you: “Start Page” to the start page, “Mail” to mail. There is no uncertainty or fear of clicking on the “wrong” thing.

Elements of an interface that rely upon symbols with obscure meanings require more thinking than those that rely upon a familiar language (visual or otherwise). The overly-reduced navigational elements of MobileMe are tough on the user and introduce uncertainty into elementary components of its interface; adversely affecting the usability of the site. 1:0 for Google.

Design for the Eye: (Dot)Me

The claustrophobic top bar does little in the way of providing a user with orientation within the overall site structure; it is exemplary of uninformative fanciness. Let’s take a look at another example: 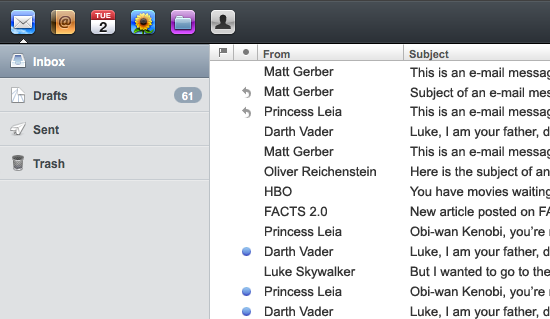 We’re in Mail (probably), in the Inbox (most likely), and there’s not a whole lot of indication of what would happen were we to click a message.

Reducing uncertainty and improving understanding are critical components of good Web design. Unintuitive information can be made clear and accessible by thoughtful structuring and visual manipulation of that information, but that’s not being done here. The colors, background images, and various other graphic elements hinder the information; they don’t serve or support it:

Design for the Brain: Gmail 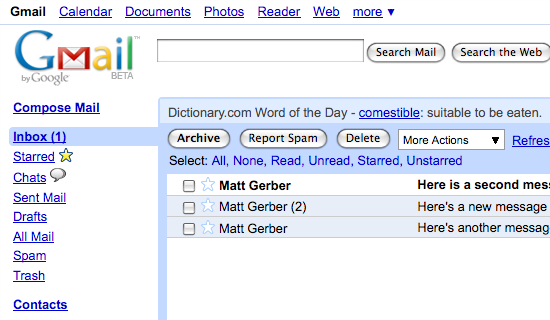 GMail’s interface feels “safe.” There is noticeably less uncertainty. It’s clear what most things actually do. The logical ways are short and cause-and-effect is obvious. GMail maintains the look, feel, and interface of a website by using the commonly accepted interface elements of a Web browser. 2:0 for Google.

The most noticeably frustrating characteristic of MobileMe is its slowness. Excessive load times, when expected, should be accounted for in an interface, and feedback should be provided for users. Web browsers, by nature, have means of handling load times by showing users a loading icon in a tab (as with Firefox). GMail relies on this functionality to inform users of long waits.

The skinning cannot be blamed for excessive load times. But not accounting for unresponsive interfaces is negligent on the part of an interface designer. MobileMe assumes the flash-site approach and forces their users to learn and adapt to an entirely new and oftentimes unintuitive interface—an application best kept off the Web and left on the desktop where it belongs. 3:0 for Google.

The media-appropriate approach of Google shows that the interface is not a matter of graphic design, it’s a matter of how it works. With all the glitz Apple brings to the Web in an attempt to win a beauty contest, they lose the true contest: the beauty of usability. But that doesn’t mean you shouldn’t give your Web app a manicure.

Apple’s attention to graphic detail usually leads to astonishing results. Yet what makes or breaks a Web app is not its shapes and colors: it’s the logic that drives them. And that logic is defined by the media and not by aesthetics.