The Value of Information

When confronted with the necessity of offering news for free, editors are quick at pointing at the cost involved in news production. Which of course is beside the point. Information on the Internet is as common as snow in the arctic. You can’t expect Eskimos to buy a snowman. But, hey, wait; this is not just another rant with the usual talking points. After producing news site after news site for a wide range of customers, we actually have something to contribute: 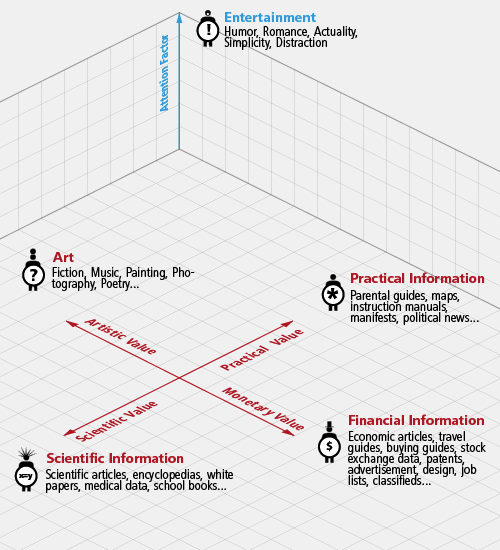 That information is not necessarily connected to a physical good (paper) or a concrete service (the delivery), or a limited quantity anymore, making it difficult to measure its price. We have difficulties spending money for digital information because at the end of the transaction we neither save time nor do we hold anything concrete or limited in our hands. It feels like buying air.

Even though practical and financial information has direct or indirect (i.e. time saving) financial value, mostly the value of information consists of qualities that are tough, impossible or even unethical to sell. Stripping information off its heavy physical body and avoiding the wasteful physical distribution and making its access unlimited uncovers the essential, that is: intellectual value of information. And which true capitalist would pay for such useless nonsense such as sophistication? OK, not so fast… Let’s first look at different information categories and what they’re worth:

If you play according to the basic rules of online self-promotion, economic data is an easy sell, since your customers can see a direct monetary profit from acquiring your data. See Wall Street Journal.

Art is information composed of data as a means and goal in itself and for itself. Examples: Fiction, Music, Painting, Photography, Poetry. Art is not made to be profitable but as a means for itself and in itself.

Art may be or do anything, art doesn’t have to be or do anything. Artistic information is free by its own definition. That’s why art needs to be tutored, sponsored, supported by the state, by corporations and by the individual.

Scientific data has educational and social value. It should not be sold; it should be shared as much as possible. Sharing scientific information is the way to increase scientific knowledge. It’s not an accident, that Wikipedia is often imprecise with cultural data while it beats the Encyclopedia Britannica on specific scientific knowledge.

Science needs to be funded by society; a rational society is built on the knowledge of its citizens. Call me an idealist, call me European, call me naive, but if you charge a kid if it asks you why Australians don’t fall off the planet, there is something wrong with you.

Practical information carries data that supports the process by which we make decisions. Examples: Political news, parental guides, maps, instruction manuals, manifests. Practical data is comparable to economic data: It saves you time and nerves and thus allows you to be more productive.

Political information is a special case, as it doesn’t translate into a personal but a social benefit, or, as in the case of commercial news, for a particular social group.—If you pay for commercially created political information, you help influence other people’s decisions in your political group. Think Fox News. Paid by rich people to recruit poor people like Joe the Plumber to speak and vote in favor of rich people.

While it’s true that commercial news needs to produce opinion, as opinion is the only way to attract attention in a world where political facts are free, opinion based reporting is a slippery slope (again, see Fox News). Fortunately, commercial brands with a wide range of customers don’t want to be associated with extreme political positions.

In order to guarantee a balanced discussion and avoid money to hijack political debates, commercial news needs a democratic counter balance. The BBC or the Swiss national news model are excellent examples that news cannot only be very close to politically neutral, but also, that independent news can report on subjects where commercial news might get in trouble. That’s why most free countries have a commercially independent news channel. That’s not socialism. It’s called democracy.

Entertainment or: The Attention Factor

If you want to sell information other than financial data, you have to entertain. Here, in return, Europeans can learn a lot from US high-culture. Entertainment makes your data commercially attractive. That doesn’t automatically mean that it becomes trivial (see HBO).

If you produce information that is both intelligent and entertaining it has high attention value. The attention you get can be monetized through advertisement, sponsoring, selling physical goods. If it’s high quality (and by high quality I mean HBO quality), you might be able to sell the easy direct access to it. Selling entertainment only works for data that you can access passively (movies, music).

So how can News be Monetized?

Valuable information always finds its way to the recipient. You better distribute it yourself, before someone else gets the attention in your place. Whether it’s fair to the hard working comedian, musician or Hollywood movie director that a lot of work is “given out for free” is not the question to ask. The question is: What do you do with the attention you get for your information? In other words: How do you advertise?

Even though readership of analogue news is melting away while digital readership skyrockets, the paper edition still makes an average of 10 times more ad revenue per user than online services. The monetization per user is 100 times higher in paper than online. It is key to understand that at this point, most of what a news site is doing is advertisement for the paper edition. A newspaper with an inaccessible website gives away the cheapest and most efficient self-advertisement space.

To a certain degree, the inverse is true: A traditional paper that gets rid of its physical counter part has a tough time keeping its online audience.

The trick is to connect both editions and try to bridge the transitional survival phase in which news currently is. For daily news brands this is the time to eat or be eaten. Let’s not fool ourselves here: In 10 years there will still be some high value well curated weekly publications, but no more daily paper. It just doesn’t make sense trying to compete with the much faster much more convenient online offer on a daily basis.

The good news is that the less papers are read and the more attention online gets, the higher the chance to sell advertisement online at a decent price. The real problem newspapers face is that corporations are still willing to pay fantasy prices for print and TV, offline ad production as well as for offline distribution. As long as the blue print for online advertisement is Google adwords, there is no hope for commercial news to survive the new media shift.